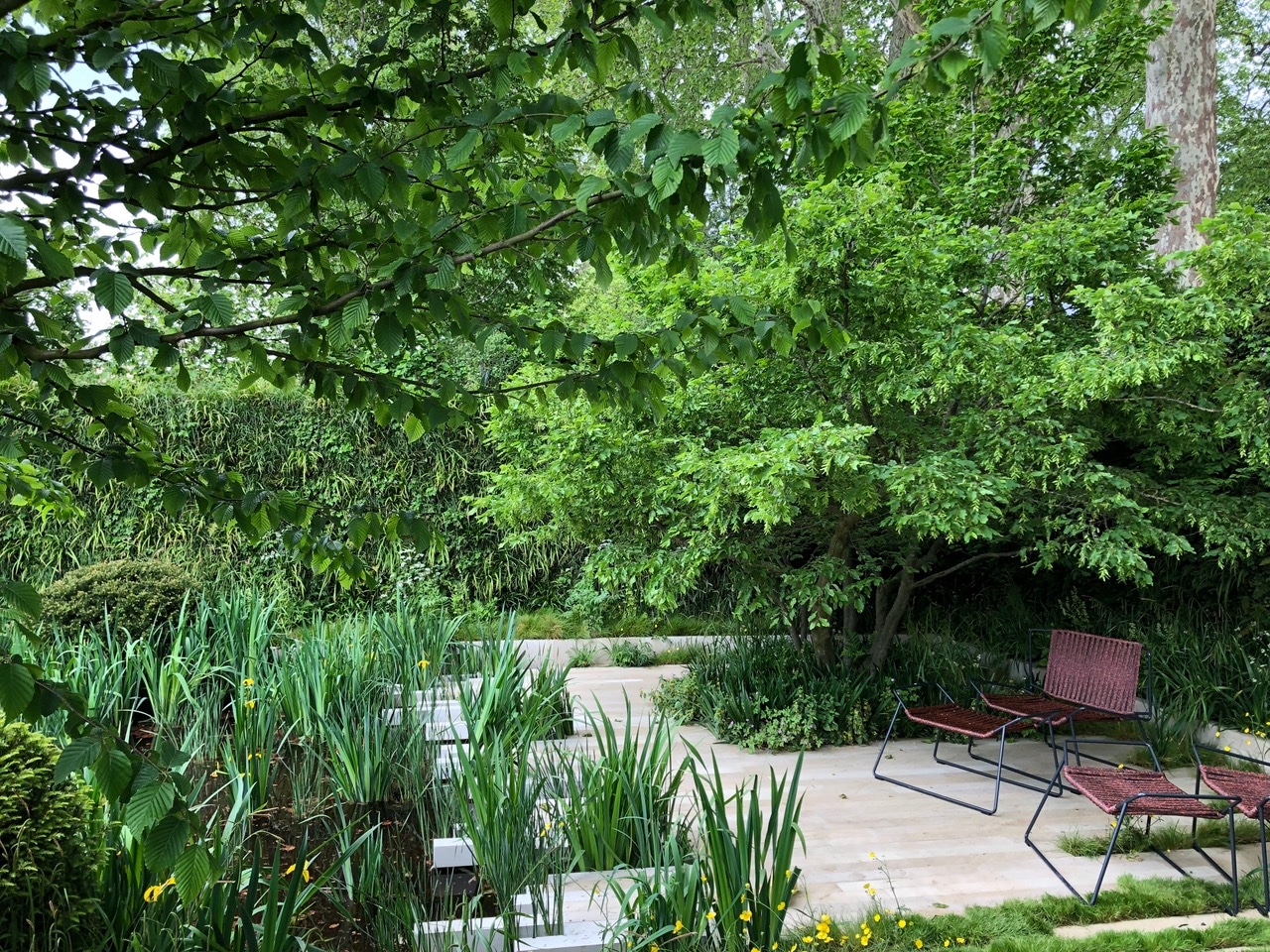 Trend spotting at the RHS Chelsea Flower Show has become an annual tradition for us.

RHS Chelsea has been called the ‘greatest event in the horticultural calendar’ and the show has always maintained a huge influence on tastes in garden design. It is celebrated as the place to explore some of the most cutting-edge ideas in garden design, with many of the leading names in garden design pushing their creative boundaries to design something original and newsworthy for the Show. Almost all the garden designers that exhibit at RHS Chelsea are members of the Society of Garden Designers (SGD). Every year we pull together a short report for the SGD highlighting the key trends seen in the gardens designed by their members and, as the show gets under way, we release the report to the press. This year, green roofs, dramatic boulders and mini forests were all hallmarks of the Show. Here is a look at the top ten trends in more detail.

The natural landscape is a major influence in gardens of all sizes this year. Joe Perkins MSGD imagines the ever-changing coastal landscape using naturalistic seaside planting including Agapanthus, Sea Kale and the Australian Cushion Bush and Tom Hoblyn MSGD takes inspiration from the wind-blown sand dunes of arid landscapes for his Middle Eastern garden. More easily replicated is the planting on the Warner’s Distillery garden by Helen Elks-Smith MSGD, inspired by the English countryside and including a wildflower turf embedded with local species of Cowslip, Achillia and Harebell and a swathe of native hedgerow, and in Sue Hayward’s artisan garden where the designer has created a haven for wildlife.

2. WOODLAND GARDENS
Woodlands and forests abound at this year’s RHS Chelsea Flower Show suggesting that we’ll be seeing a lot more domestic woodland gardens in the future, including ‘mini forests’ in smaller urban gardens. Most notable amongst those at RHS Chelsea is the Resilience Garden designed by Sarah Eberle FSGD, which showcases the ‘forests of the future’ by using trees that are resilient to climate change. Andy Sturgeon FSGD has also chosen a woodland landscape, colonising it with young trees, ferns and jewel-like flowers; while Andrew Duff MSGD has created a sustainable woodland clearing featuring bio diverse trees that celebrate the environmental benefits of woodland and Jonathan Snow brings the temperate rainforests of South America to the show.

3. GREENERY & FERNS
If you shy away from bright colours, you’ll be pleased to see that greens, whites and pale yellows are dominating the planting palettes of the gardens this year with texture and form supplying extra interest. Ferns, once left languishing in the shadows, are seeing a particular resurgence creating a vibrant green foliage on both Andy Sturgeon and Sarah Eberle’s gardens, as well as featuring on the Warner’s Distillery garden designed by Helen Elks-Smith. In Addition, Kate Gould MSGD has mixed Aspidistra, normally used as an indoor plant, with swathes of Hostas and trees ferns punctuated by explosions of yellow Irises and Lupins to create a calming and uplifting space for Greenfingers Charity and Tom Stuart-Smith MSGD uses a palette of greens on his garden for RHS Bridgewater.

4. ARCHITECTURAL FRAMES
A wonderful way to draw the eye to different parts of the garden, frames created by architectural forms such as pergolas are an easy way to add a little bit of Chelsea to any garden. Jo Thompson’s garden is dominated by a striking classical colonnade guiding the visitor through it by offering ever changing framed views, each with a different perspective on the landscape that has been created while Tom Stuart-Smith has incorporated two large steel frames to create a sense of containment and drama in his large, contemporary garden for the RHS.

5. ROCKING IT
Rocks are big at this year’s RHS Chelsea, a trend easily replicated at any scale to add drama to gardens big or small. Going big, Jilyane Rickards MSGD has included huge red boulders, roughly hewn and balanced on top of one another in her African-inspired garden for CAMFED while Andy Sturgeon’s garden features a staircase of vast English ironstone platforms and Joe Perkins MSGD includes dramatic rock formations inspired by the coast. Sarah Eberle also incorporates large lichen-covered boulders to punctuate her woodland setting. On a smaller scale, Tom Hoblyn MSGD uses burnt sienna gravel on his paths to mimic the eroded rocks of an arid landscape and for a more structured look, Helen Elks-Smith has designed a pavilion made of traditional dry stone walling alongside a rustic limestone water trough.

6. LIVING ROOFS & WALLS
Leaving no space untouched, the growing trend for green roofs and walls is evident on gardens large and small at this year’s show, including Helen Elk-Smith’s garden for Warner’s Gin which features a vibrant living roof of Sedums, Euphorbias and Thyme; and Andrew Duff’s garden featuring the largest green wall ever seen at RHS Chelsea planted with a mix of ferns, grasses, ivies and herbaceous flowering plants. With outdoor space at a premium, vertical gardens are a wonderful way to incorporate greenery into any garden especially in urban areas.

7. PURE WATER
There are lots of ways to add water to the garden and this year inspiration comes from the natural world. If you’re looking for a dramatic effect, Jonathan Snow incorporates waterfalls cascading into a pool below, while Joe Perkins uses the eroding force of coastal waves as the inspiration for the water in his garden. For a calmer, more relaxed feeling, Helen Elks-Smith takes inspiration from natural springs creating a series of water features that appear and disappear throughout the garden creating gentle arcs and streams that flow quietly through the space. Creating a similar effect, Andy Sturgeon incorporates a series of clear streams trickling quietly through his design while Tom Hoblyn and Andrew Duff have both designed oasis-like pools of water at the centre of their designs to create a feeling of tranquility and calm.

8. COW PARSLEY
The delicate white flowers and fern-like foliage of cow parsley has proved especially popular on Show Gardens this year, a planting trend that will add a naturalistic charm to any garden. Andrew Duff uses the umbrella-like clusters of white frothy flowers to decorate his woodland glade alongside bright yellow buttercups and Helen Elks-Smith incorporates it into a swathe of native hedgerow that wraps around the central pavilion on her garden for Warner’s Distillery. Elsewhere, Jo Thompson adds it to a mass of dynamic planting around a central stone colonnade creating a soft, textured feel.

9. SCULPTURAL FORMS
A mainstay of RHS Chelsea, bold sculptural forms are a wonderful way to add drama to a garden. This year, Andy Sturgeon and Tom Hoblyn lead the way, both incorporating striking features inspired by the power of nature into their gardens. In his garden for M&G Andy Sturgeon uses huge burnt timber sculptures to represent natural rock formations that slice through the woodland planting, while Tom Hoblyn uses traditional earth rendering techniques to create sand dune-like shapes weaving through the garden to create a series of dramatic raised beds.

10. DECORATIVE METAL WORK
An easy element to introduce into any outdoor space whether as a sculpture, planter or screen, metalwork has taken on a more decorative edge this year. 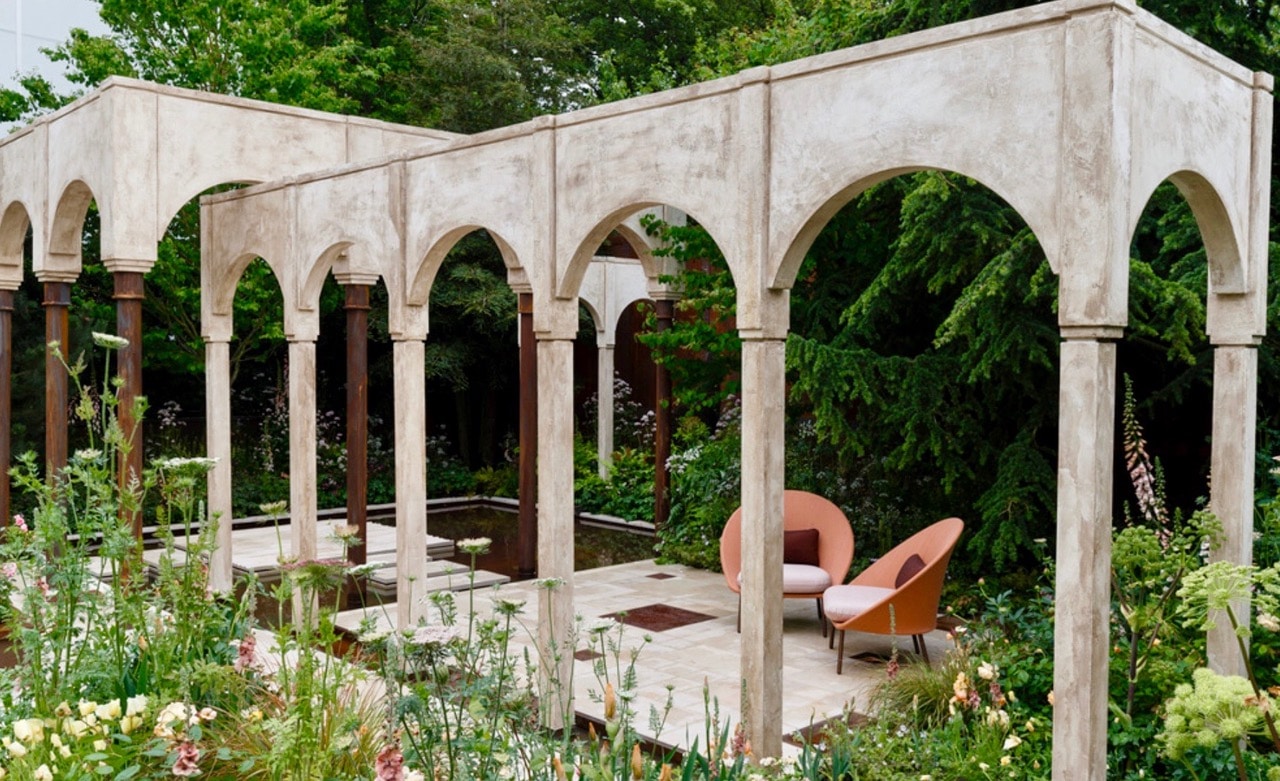